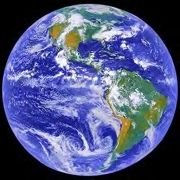 Earthweek April 19-25, 2020
This week marks the 50th anniversary of Earth Day. So much has changed since that starting day in 1970. The global population has doubled from 3.7 billion to 7.8 billion. Global energy consumption has gone from 53,000 terawatt hours to 133,000 terawatt hours, releasing tremendous emissions in its wake. (A terawatt is one billion kilowatts.) In 1970 single-use plastics were a rare commodity. The beverage industry would introduce bottled water and sodas in plastic bottles in the early 80s and the earth would go from zero of these single-use plastics to 60 million-per-day, in the United States alone. The world is consuming one million plastic bottles every minute. In 50 years we have accomplished a lot, but the earth is more threatened now than ever due to the reckless exploitation and wasting of resources. This has to stop or life, as we know it, will end. Is this possible? While the recycling rate for single-use plastics in the US is around 9%, in Norway they recycle 97% of plastic bottles used. How do they do this? – with government, industry and public cooperation.
• In Norway, they have a system that makes recycled plastic more valuable than new plastic made from fossil fuel
• They separate out the valuable plastics at recycling centers
• They make it easy to recycle in many places
• They reward recycling
The earth needs to heal and has given us a time to pause and reflect. If humanity wants a future home then it must change course and mimic nature, not fight it. There is almost zero waste in nature. We need to emulate nature and strive toward this goal. It can be done. Our lives depend on it.
Humanity: There’s no way we can shut everything down in order to lower emissions, slow climate change and protect the environment.
Nature: Here’s a virus. Practice.
Learning the Lessons of the Planet
“As we continue to recklessly degrade the global environment, and our society starts to feel the sobering consequences, we all need to step back and quickly learn—and live by—the lessons that our living world can teach us.”
Opinion by Jonathan Foley